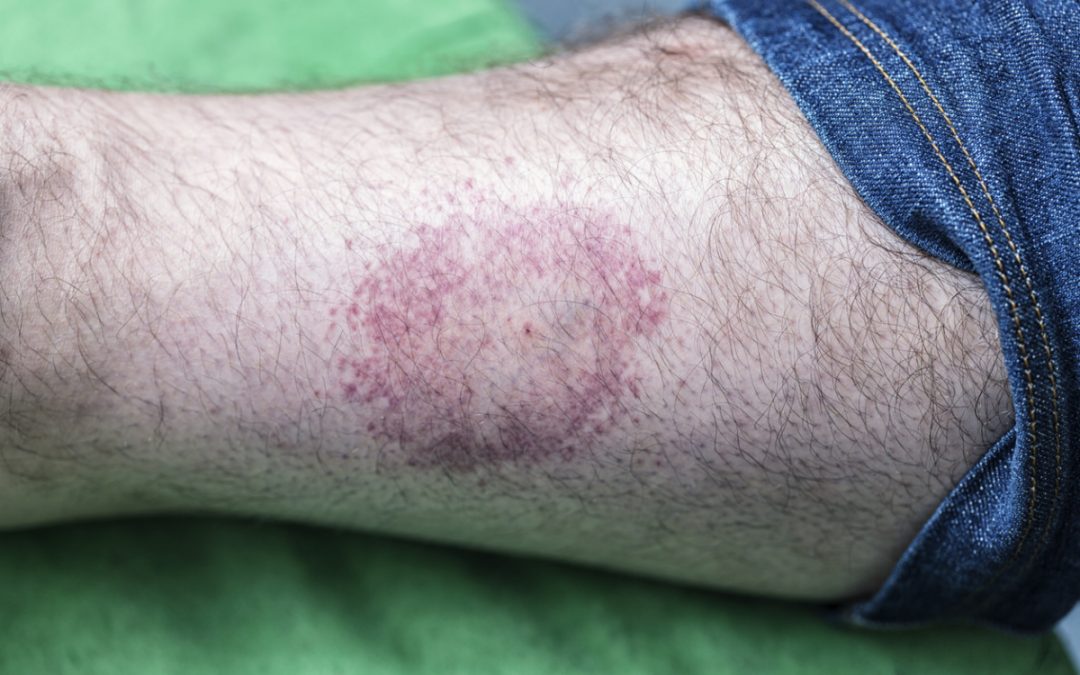 There are many Lyme Disease symptoms to read about and breakdown. Today we breakdown a common symptom, bulls eye rash. Read more below…

Bites and stings produce different symptoms, especially in the area around the spot where the insect made contact. Knowing the difference is essential to see if you should seek treatment. Here is a brief breakdown of common bites and stings:

Another common insect bite is from a deer tick, which occurs hundreds of thousands of times every year. There are significant differences between a deer tick and all other insects in how they bite and the after-effects.

This may surprise you, but deer tick bites are much different than the sting or bite of other insects. When a deer tick latches onto your body, it can spend up to 48 hours looking for the perfect spot to embed in your skin. Yes, they embed in your skin by breaking the skin’s surface. Ticks feed on blood alone, so just biting you would not help them survive.

They must break your skin so they can get to your bloodstream. Because deer ticks are so tiny, you may not even notice where they embed. The bacteria they carry can cause noticeable symptoms, like a bulls-eye rash.

Picture a solid red circle with another, larger, red line surrounding it. Between the red circle and the red line is your normal skin color. What looks like the center of a target is a sign to seek medical attention right away. It is a sure sign you are infected with the bacteria Borrelia burgdorferi, which causes Lyme disease. The sooner you can be treated, the better chances you have of eliminating the bacteria from your body.

Some people who get the bulls-eye rash mistake it for other conditions.

It is easy to mistake the bulls-eye rash for other bites, stings, or infections because each person can have a different perspective on what a bulls-eye looks like. Round, red, with a mark in the center. That description fits almost all stings and bites.

You must look at pictures of different rashes so you know the difference. Examples of look-a-like rashes include a bite from a horsefly. While the rashes look the same, the effects are different. Horsefly rashes appear immediately, along with stinging, burning, and itching.

Ringworm looks like a bulls-eye rash. However, ringworm is caused by a fungus, and the red rings of the rash become raised and itchy. Hives can appear differently in people, depending on their specific reactions to allergies, infections, or other triggers.

Atopic and contact dermatitis, pityriasis rosea, cellulitis, eczema, and psoriasis can produce circles, patches, or lesions. Each can be treated effectively, so if you see a rash of any kind, seek treatment to ensure it is adequately cleared.

Because rashes can resemble multiple conditions, you must pay attention to other signs and symptoms that may appear.

Common early symptoms that appear in the first few days or weeks of being infected with the Lyme bacteria include headaches due to inflammation around the spinal cord. Headaches can be mild, moderate, or severe. A stiff neck usually accompanies the headaches.

Feeling tired when you should have energy is another symptom. Fatigue can make it hard to function at work, home, school, and socially. Flu-like symptoms include chills, fever, aches, sweats, and body aches. The pains can appear more significant in your knees and other joints.

Swollen lymph nodes in your neck, chin, armpits, and groin can be tender to the touch.

All Lyme disease symptoms will worsen if your Lyme disease is left untreated. Symptoms develop in three stages. The first stage is called early localized Lyme disease. If they are not treated in this stage, Lyme bacteria begin to multiply and spread throughout the body, affecting more parts of the body.

Stage two is called early disseminated Lyme disease. Along with stage one symptoms, you may also experience bells palsy, weakness or numbness in your arms or legs, blurred vision, heart palpitations, and lesions or rashes, unlike the bulls-eye rash.

The most recent data on Lyme Disease from the Center for Disease Control and Prevention shows that there were nearly 35,000 reports of Lyme disease for every 100,000 people in the United States in 2019. The breakdown of Lyme disease cases looks like this:

As you can see, Lyme disease has now spread across the country. Taking preventative measures to protect yourself outdoors is a must to avoid the bulls-eye rash and the many other uncomfortable symptoms of Lyme disease. Don’t stop enjoying the outdoors but do what you can to avoid an encounter with a deer tick.